The first thanksgiving feast between the Native Americans and Pilgrims that I was taught about as a kid colored my stories about the photo below.  This is a picture of my own Native American ancestor and her white husband, and as a kid, I told myself a story about a lovely unity and cooperation between the settlers and the Native Americans, a unity that led to a marriage that eventually led to my family.

But, is that the true story behind this photograph, behind the story of Thanksgiving? 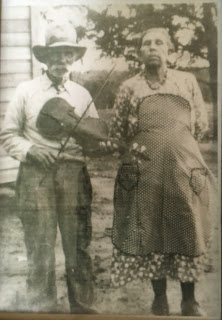 I don't really know much about the real lives of the two people in this picture, and what really happened in that first thanksgiving feast also feels like a quite a mystery to me as I've learned more about that era.  I discovered this article, and I like how it boils things down to what we most likely do actually know.  It's a somewhat lighthearted look in comparison to the detail given in this article on the oppressive relationship between the settlers and the first people of this land.

Even if there was a beautiful shared celebration, both articles agree that things turned ugly. Our government walked a path of broken promises, stolen children, and genocide, and we only relatively recently and completely inadequately have worked to right those wrongs.  This video may surprise you with some of the key dates when Native Americans earned certain essential rights.  The treatment of our Indigenous people was our nation's first great sin.

This Thanksgiving weekend, along with being filled with a personal gratitude for the overwhelming blessings of my own personal life, I have been jumping out of my skin ready to scream, "IT IS TIME that we get moving on real reconciliation of our history of ignoring indigenous wisdom and our severe mistreatment of Native Americans by doing the right thing at Standing Rock!"  Seriously, if I had a mountaintop to scream from, I'd be there, screaming until my throat was sore.

For a snapshot of what's happening at Standing Rock, here's a look at a video that lays out the situation in favor of the Tribe and an article with the position of the company building the pipeline and another article from that point of view.  I've also found this map extremely helpful to give some context.  There is a lot out there on the militarized response of law enforcement against the Water Protectors, as the demonstrators call themselves.  You can start here and here if you'd like to learn more on those violent clashes.

Although I can accept that there are different ways to look at the situation in Standing Rock, what resonates most for me is what feels like a simpler and undeniable wisdom at the heart of all this. Water is Life, the Earth supports All Life, and our current way of living is not aligned with the preservation of our natural resources and environment for future generations.  And that this message is being brought to us by Native Tribes coming together in huge numbers, unifying to speak a truth of harmony and earth-honoring that reined in this land before the settlers came - that makes this whole situation feels all the more important to me.

When I first started learning about what's happening at Standing Rock, I didn't realize the mixing of the immediate issues for the Sioux Tribe and this company trying to finish the pipeline, and all these bigger picture issues.  It all seemed very intertwined, and I didn't much notice the lines between them, but as I've gone deeper, this has all become about so much more than just the immediate concerns and needs of the Sioux Tribe.

It's become about preserving all water, Honoring the Earth in all our actions, and how the militarized response to the peaceful protests reflects back to the horrible history of relations between this country's first people and the immigrants who came to this country starting in 1492.  It's become about "killing the black snake" and keeping this pipeline from every being completed.  Re-routing it doesn't feel sufficient to me.  It's about the fossil fuel industry taking the hit this time, and a beginning of aligning bottom line profits with what really profits us all.

The first people of this land had a perspective of connectivity, harmony, and interdependence.  They cultivated their sense of connection with the Earth, the environment, the water, the animals.  They felt an allegiance to future generations, and they honored their responsibility to preserve and steward the Earth for the benefit of future generations.  The idea of land ownership made no sense to them at all, and their perspective was used against them by the early immigrants in all sorts of trickery.  Now, the realities of climate change are occurring and escalating, and the rejection of that indigenous wisdom is hitting us like a karmic slap in the face.

I pray for a miracle here.  I pray that our country starts down a new path with Standing Rock - both in embracing our different cultural populations and our shared planet.  The United States is in crazy turmoil right now, and I pray that we begin the healing by facing our history honestly and facing our nation's first sin to take whatever action we possibly can to make things right at Standing Rock. 9 Effective Ways to Help Standing Rock.

Then, maybe we can continue with the healing by turning some attention to our country's second sin: slavery.
Posted by Megan at 10:20 AM