This image really grabbed me this week: 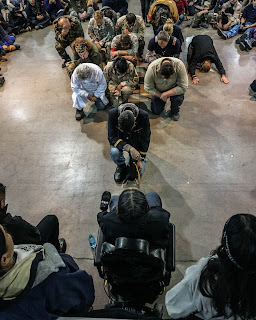 This picture was taken this past week when a group of U.S. veterans bowed down while one of them expressed an apology for how our military and government has mistreated and harmed Native people.  The Native elder responded by an in-kind apology for the 268 soldiers who were killed during the Battle of Big Horn by Sioux warriors.  This apology and forgiveness exchange was followed by a call by both the gathered veterans and the elder for World Peace.

Reading about this event, watching video, looking at pictures - this did much more than warm my heart.  It freaking set it on fire.  All week, I've felt giddy with optimism and love and hope.

Almost 20 years ago now, I was studying abroad in Australia and saw a flyer for a meeting to discuss Aboriginal Reconciliation; I was intrigued enough to show up.  The meeting was related to the Council for Aboriginal Reconciliation, and I sat and listened as this small group of passionate people talked about their plan to organize some sort-of public recognition of the tragic history of the Indigenous people who were killed and abused in various ways as the Europeans settled Australia.

Being in that meeting opened me up to consider facing the ugliest chapters of our history with something besides debilitating shame or fearful denial.  It gave me hope there was another way, and I've reflected back to that often over the years.

Australia continued experimenting with these questions about reconciliation, and around 9 years after my visit, the Australian government gave a public apology to their Indigenous people, the Apology of 2008.  This article has interesting comparisons of the Australian and United States' attempts to restore and heal relations with their Indigenous people.  The grand apology does not seem to have created the hoped for reconciliation in Australia, but that doesn't dampen my hope for what's possible.  It only makes me that much more curious about how it could be played out more meaningfully.

When awful things happen, both parties hold a key to deep resolution in their own ability to  apologize, to forgive, to be honest about what occurred.  In my own life, I've found that these are some of the hardest things to meaningfully do, and yet, these are our greatest opportunities for transformation and healing, both personally and collectively.