I had a plan to write about something different this Sunday, something a little more obviously aligned with peace.  But as I sit down at the keyboard this morning, I feel like anger is the more useful place for attention in my own journey toward greater peace.

We've all seen lots of anger projected through our screens during the last year of political debate and division.  I've found it pretty distasteful, and I felt like I mostly stayed above the anger.  Then, last weekend was one of my yoga teacher training weekends, and we learned about Ayurveda. In identifying our dominant doshas, I confirmed that I am dominantly Pitta - the fiery one.  As our teacher was reading the traits and mentioned a tendency toward anger, I remember thinking, "huh, that doesn't really sound like me."

And ever since that passing thought, life's been poking fun at me.

True, I'm not prone to screaming fits or violent outbursts.  I mostly have control of my tongue and don't call people names or burst out with strong judgements.  I mean, we all have our slips every once in awhile, but mostly, I'd call myself pretty chilled out and not at all a candidate for anger management classes.

But as often happens when I have a strong and wrong sense of myself arise, contradictions start coming out of the woodwork.

First, I kept noticing dumb stuff, like a hyped up reaction to my husband's socks, left on the floor, again!  I just dismissed these as playful and scrappy interactions.  He's obviously not intimidated because those socks will be there again and again, and I know he likes a little fire in his woman.

But then, something happened at work that triggered me.  I could literally feel the burning in my chest, and although it didn't turn into an overblown reaction, it churned in my mind, pretty relentlessly.  I could come up with soothing thoughts that calmed it down or shifted the attention positively for a time, but I was floored to notice how once that fire is lit, man, it's really hard to stop it!

And then lastly in this parade of my own disillusionment, on Friday night my daughter dropped her phone and broke the screen.  She was so freaked out about how I would react.  I was calm and fine.  (She did give me a text warning and seeing how nervous she was about my reaction quickly put me in check.)  As I talked to her later about why she was so nervous about my reaction, she had all kinds of good evidence for why she thought I'd lose my shit over it.

And finally I gave in: I am a bit of a crazy hot head.

I had a lot more self-awareness about this part of myself when I was younger.  I liked it and would describe it as passionate, not angry.  I saw it as this sparky firecracker part of my personality, and I thought it served me well in treading my own path and making sure the world gave me my due respect.

But as I've gotten older, I've been less enchanted by this passionate side of myself.  In the early years of buckling down into marriage and motherhood, that wild stallion wreaked some havoc, and wanting to cultivate more stability in my family and my life, I put some strong focus on calming that aspect of myself.

Over the years, I've gotten pretty good at more consciously deciding how to direct those energies.  I'm filled with ideas and training about calming the fire - breathing through it, doing some yoga, writing in a journal until it begins to dissipate.  And that's all well and good, but the problem is: I'm just one sock away from another flare up.

I know it will come up again and again; it's a pattern that is seemingly hardwired into me this time around.  And my big concern is that sometimes this scrappy side feels like a complete contradiction to my deepest interests and hopes to be a contributor to peace in the world.

The faces of peace and of fire seem so different from the outside, completely opposed.  But for some time, I've had this intuition that they aren't as separate as they seem.  I started exploring this idea of fierceness in peace a long while back in this post: the other side of peace.

As I think about Dr. Martin Luther King Jr and other heroes of peace, I sense a certain grit and fire that fueled their faith and leadership to go beyond the dominant movements of the culture.  I sense that this fire has a place in a movement toward greater peace, both within and out in the world.

Dealing with the anger is so tricky though, and really, I feel like a novice.  On one hand, I sometimes hold it inside myself to my own detriment, imploding with a fire that craves expression but I'm too afraid will come out wrong.  Or then, there are the times when I let it rip, and I feel horribly guilty for being unkind in ways I truly did not intend. 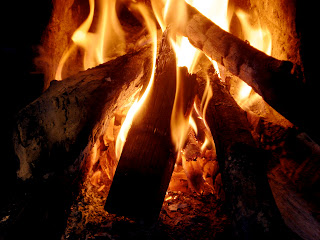 The anger seems like the sword of the peaceful warrior.   It can be the tool that slices through resistance, ignorance and inertia and brings real and lasting change.  But, as we have seen in recent times, it can also be so cutting and simply fuel more destructive anger.

I get the sense that our fate will be determined in large part by how we learn to wield this sword.
Posted by Megan at 8:23 AM