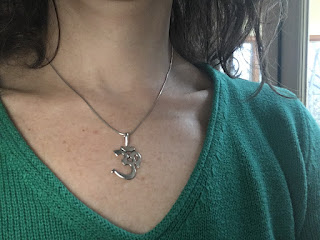 Every so often I sub in a different necklace, but at the end of the day, I feel like I need to get that imposter off and quickly get back to home base.  I just feel most authentic and like myself with this around my neck.

And the events of this past week, starting with MLK Day, then to the Inauguration, and finally yesterday's immense display in DC and around the world with the Women's March, have really got me thinking about the core sentiment that makes this necklace so special to me: Unity.

My understanding of the Om symbol is that it represents the sound of the Universe.  If all the different sounds and vibrations could be heard together, creating one symphony, one harmony, one vibration, it would be the sound of Om.   To me, the Om represents the One: One Life, One Being, One Human Race, One Love, One God: an indivisible reality that includes Everything.

Starting the week off with a flood of quotes from Dr. Martin Luther King, Jr., it all felt so in line with this sentiment of unity.  And then, inauguration day demonstrations around the world reflected his famous quote: 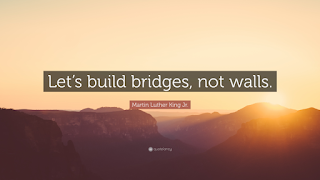 Although a response more directly to Donald Trump's assertion of a policy to build a wall between the US and Mexico, the deeper sentiment of connection, love, and unity seemed very much at the heart of these global demonstrations.

But it was yesterday, as I spent the greater part of my day watching live feeds from the Women's March in DC, that all this inquiry into unity went a bit deeper.

As the March was approaching, I felt happy to see it coming together, and at the same time, quite certain my low-level-anxiety, crowd-averse self was not meant to hit the streets.  This set of Unity Principles around which the March was to revolve all resonated for me, and the idea of people channeling their angst feelings about the new president into an action felt right.

Although not as a marcher, I did find my own perfect way to contribute: crocheting hats.  A cousin was heading to DC with a group of 4, and I made them all these pussyhats: 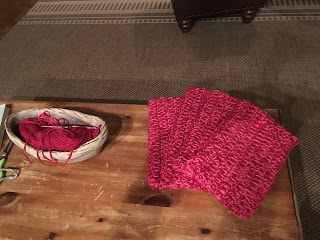 I loved the idea of this whole hat project.  The unifying image of a sea of marchers wearing similar hats to express their power, their allegiance to the feminine, their oneness; it really inspired me.  And more, the fact that the world wide club of crocheters and knitters were stitching their love and support into hats that they sent off to DC tickled my heart even more.

I tuned in to see this great sea of pink, this unified demonstration, and I saw it, far beyond the pink hats and the borders of DC.  Truly, a touching and great display of solidarity from around the world.

But, I was reminded of a phenomenon that I've been seeing repeat itself for years.  I wrote about it first in this post: the 100%.  There I was talking about the Occupy Wallstreet movement and the common slogan of the 99 percent versus the 1 percent.  And yesterday, I felt a similar sense of these gatherings that seemed in large part to be motivated by the desire for unity, for bridges, for inclusion, that end up expressing messages of divisiveness.

The two most obvious divides I kept feeling arise yesterday were the Trump hate and the abortion debate.  When position statements about abortion and cutting criticisms of the new president were spoken or displayed, I started to wonder: how would I feel if I was strong moral/religious pro-life advocate? Or how would it feel if I was a woman who voted for Trump, not as a fan of his behavior or his every position, but only because I thought he better embodied my thoughts about what was good for the country?  When I explored what I'd feel like if I were those people, inclusion was not at all what I felt.

There was a subtle assumption that the liberal position on these things (Trump's a dangerous jackass and reproductive freedom is a fundamental right) are the only sane perspectives.  And even though these particular liberal positions are ones that resonate for me, I cannot agree that they are the only sane and loving ways to look at these questions.  I believe that it was this pattern of condescending liberal assumption that drove much of the momentum leading President Trump (for an article with a similar perspective click here), and this condescension isn't just coming from  liberals - it happens in both directions and in so many different ways.

It's a reflex to belittle and even demonize opposing points of view.  It is a shadow that we need to tend to if we are ever to become truly unified.

No one can deny the incredible chasm that has been growing for many years in the US.  I saw one post yesterday that used the tag line "Two Americas" showing passionate and adorned demonstrators in support of Trump's inauguration and against it from this past weekend.  It left me wondering where these Two Americas is leading us.

Is the growing divide foreshadowing a civil war, or is it the call for us to do the difficult work of building bridges, even on the issues that divide us the most?  Will we face our disagreements with judgement and ridicule, or will we listen, try to understand, try to put ourselves in the position of those who see things differently?

Of the thousands, perhaps millions, of people that showed up around the world yesterday, a great variety of intentions were being expressed.  As I look to recent movements, I think this variety as it becomes expressed can be the Achilles Heel that becomes the movement's undoing at a certain point.  The more specific and loud different people get, the more people start turning away because the movement no longer really expresses their point of view.

There's another way though. We can rise above our differences of opinion and come together in our commonalities as citizens and as human beings.  If we look closely, I think we'll begin to notice the difference between our opinions and our humanity, and in this noticing, we can build a ground where more and more of us can meet, just as Rumi said,

"Out beyond ideas of wrongdoing and rightdoing, there is a field.  I’ll meet you there."

True unification requires us to sacrifice our own sense that we are right.  It requires us to suspend our judgement and open our minds.  After listening, we still may not agree, and we still may need to hold firm to our convictions and work hard to help other people understand our points of view.  There may even be times when we face atrocities and injustices so great that we need to take strong and unbending positions, actions of great magnitude and importance.

But, what non-violent leaders like MLK and Gandhi showed us is that it is possible to stand firm in a point of view with your hand still outstretched to the ones that disagree.  Yesterday, I wondered, what if some of Trump's family came to the March, maybe even wanting to put on a pussyhat and show their support in one way or another.  Would they be welcomed guests?  Should they be welcomed guests?

My prayer coming out of this extraordinary week is that we start thinking of inclusion in bigger terms.  May we embrace and allow room for our fantastic and great diversity, including our diversity of opinion and belief.
Posted by Megan at 9:10 AM